Where it all comes together

Located in the western Canadian province of Manitoba, Selkirk is about 22 kilometres / 14 miles northeast of the provincial capital, Winnipeg. Selkirk offers easy access to all of Manitoba’s major highways, rail spurs, and the Richardson International Airport, connecting the city with national and international markets. Selkirk also has regional connections to St. Andrews Airport, a satellite airport, and Centreport Canada, the 20,000-acre inland port. With many of Manitoba’s top-ranking freight carriers nearby and Manitoba’s largest U.S. border crossing an hour-and-a-half away, this city offers numerous logistical advantages.

Access to an educated labour pool and research and development facilities are critical to the sustainability of any modern community. Selkirk is within 50 minutes to the University of Manitoba, University of Winnipeg, Red River Polytech, Manitoba Institute of Trades and Technologies, and a handful of international research and development institutions. This proximity enables Selkirk businesses to benefit from and participate in significant innovation activity.

Selkirk is positioned amid several growing rural and suburban communities in one of Canada’s most promising regions. This central location makes it a key hub for more than 45,000 people — roughly five times the city’s population. With recent residential developments, including single family homes, apartments and condos, Selkirk has the infrastructure to support its growing population and local businesses.

For more information about Why Selkirk, please go to Data & maps. 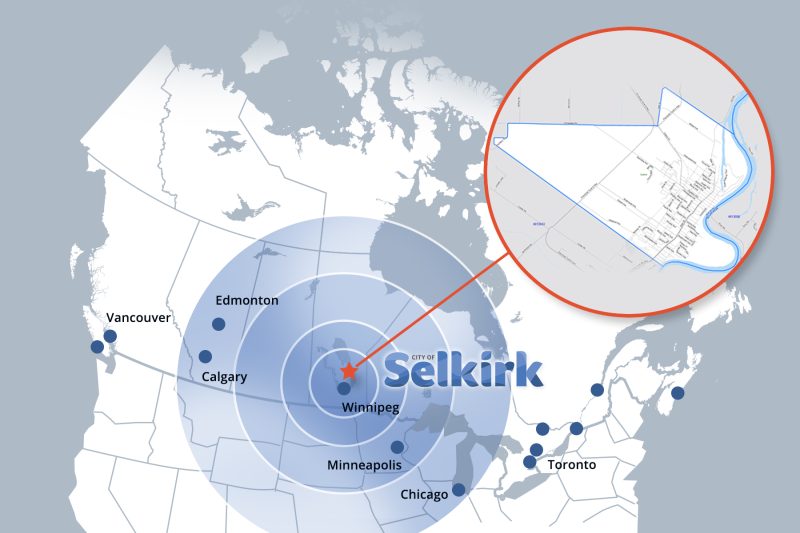